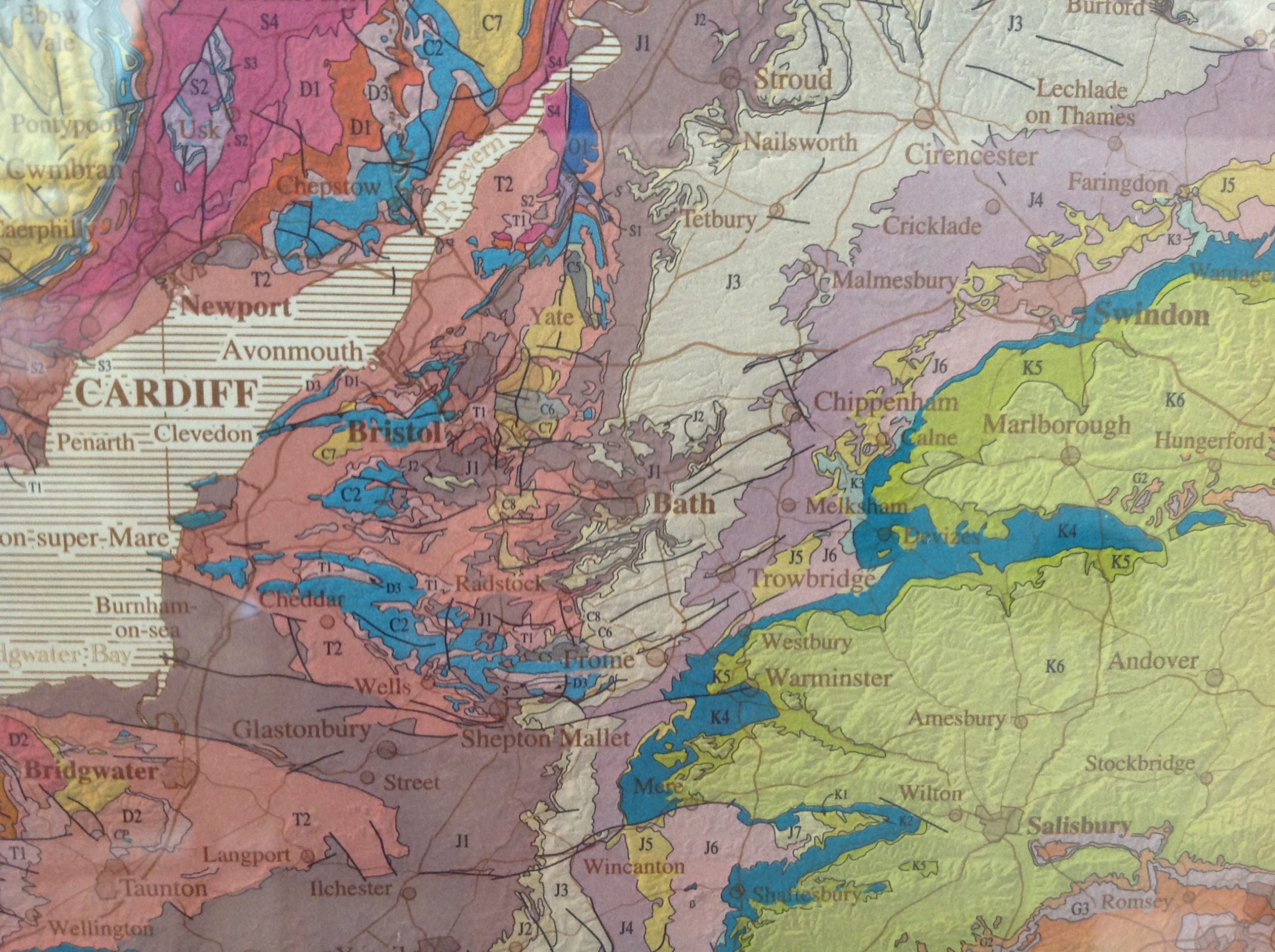 I went to Bath at the weekend, walking from Bradford on Avon along the canal, then through a mile long railway tunnel cut into the limestone. In Monkton Combe we passed the house of William Smith, who made the first geological map of Britain in 1815. The map shows the white streak of oolitic limestone which Bath is built of. The limestone was formed during the Jurassic, by small, round accretions of calcium carbonate deposited at the bottom of a shallow sea. Either side of the limestone are layers of mudstone and fuller’s earth, a type of calcium rich bentonite clay. William Smith put money into a Bath stone mine, which unfortunately produced only inferior stone and he had to go to debtors’ prison. He was not recognised until old age as the father of British geology. 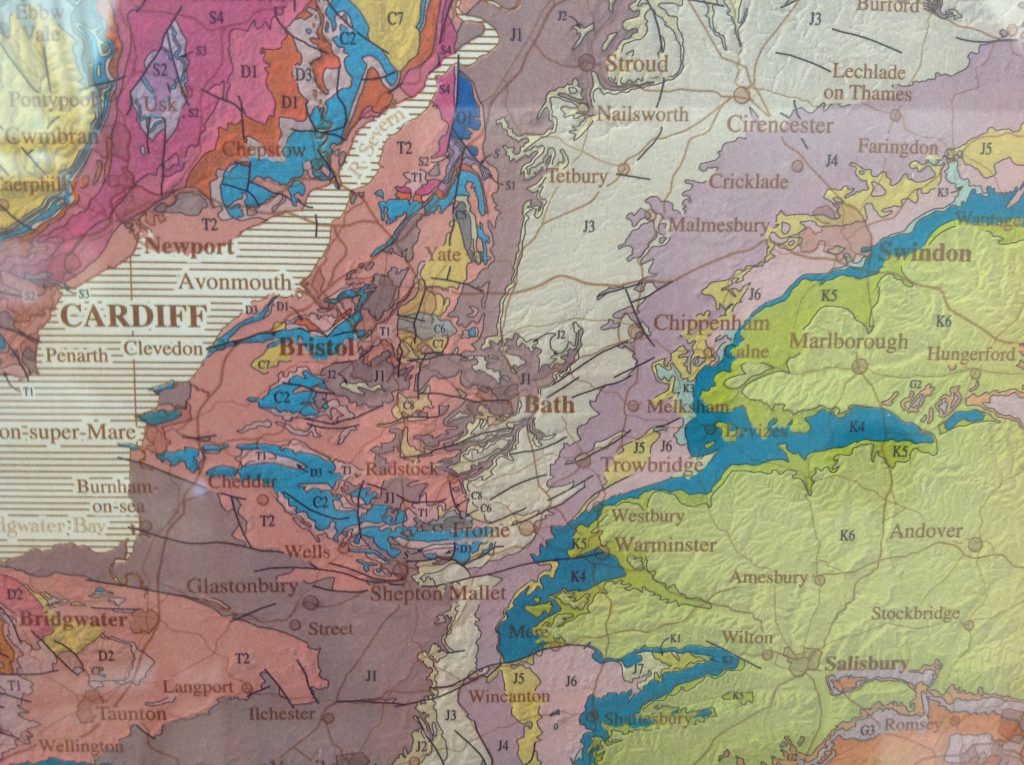 During the walk, we noticed many wild flowers which grow in chalk soils,  including Bath asparagus, ornithogalum pyrenaicum, which only grows in seven counties but is common around Bath and Bristol. The shoots used to be eaten as asparagus. In the grounds of Monkton Combe school, we saw bee orchids, ophrys apifera, which look like little brown bees with pink wings.

In the Monkton Combe village churchyard was the grave of Harry Patch, the last surviving soldier of the First World War, who died in 2009 aged 111.

I was interested in how the underlying limestone has affected the landscape, the flowers that grow there and the birds and animals. During the walk we heard chiffchaffs, saw a kestrel carrying a mouse, passed ducklings and dragonflies, as well as yellow irises, purple hedge woundwort and pink geranium pyrenaicum, hedgerow cranesbill.

We went through a very long, dark tunnel through the limestone hill, walked across Bloomfield Green and ended up in Bath, the city made of beautiful Georgian houses of cream coloured limestone. 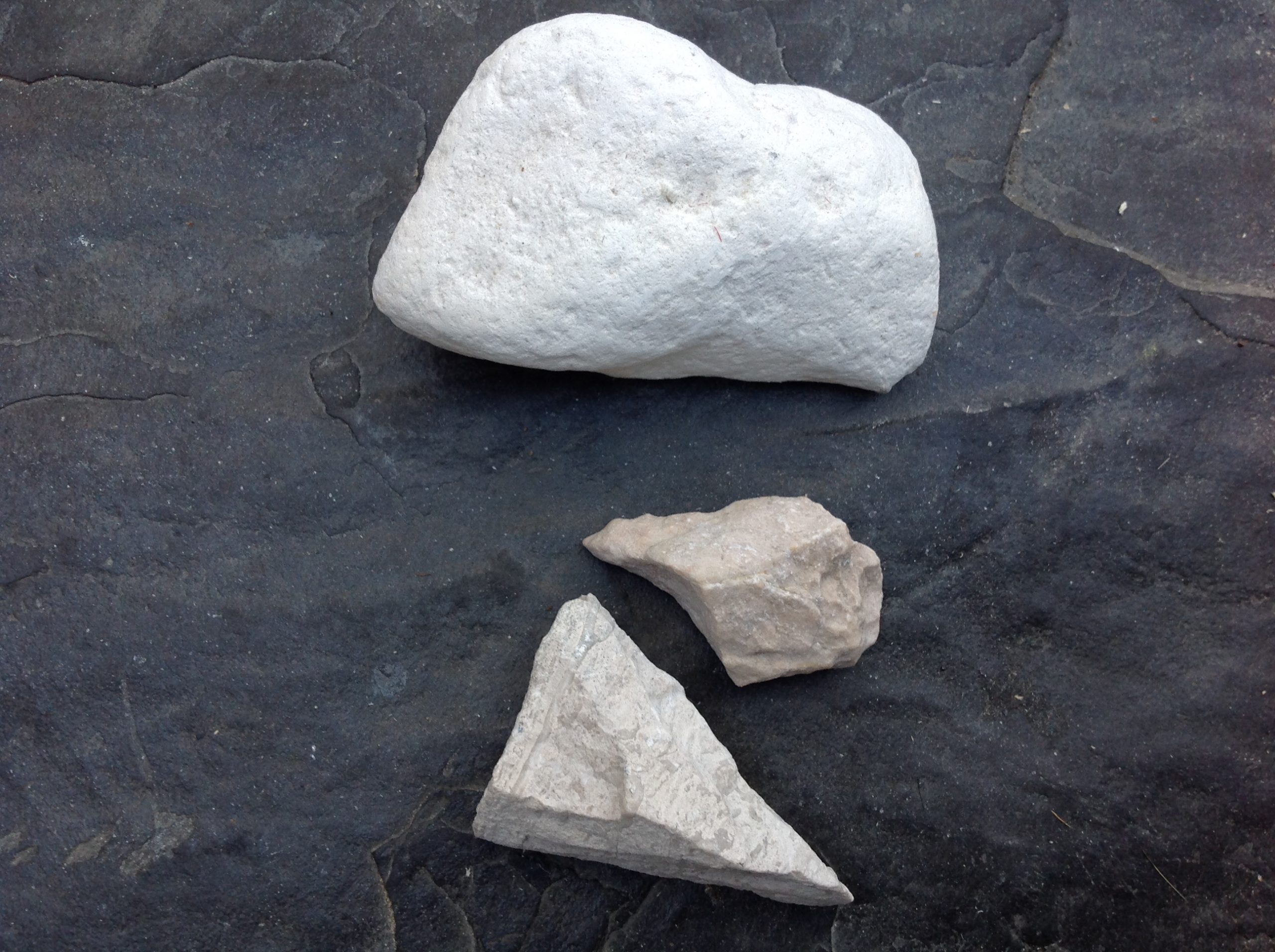 Stoneware and porcelain glazes are made up of at least four ingredients: silica, feldspar, whiting and clay.  This is what they look like in their raw mineral forms. Silica is ground flint or quartz, usually from sand or sandstone. These are large pieces of milky quartz from a vein in igneous rock.

Silica has a high melting temperature. In order to melt in a kiln, it needs a flux. The main flux in stoneware and porcelain glazes is feldspar, found in granite, an igneous rock composed of the minerals feldspar, quartz and mica. This piece of granite from Devon has both muscovite (silver, sparkly) and biotite (black, crystalline) mica. The dark vein is mafic rock, high iron and magnesium. Granite forms when molten magma cools and solidifies. The darker minerals solidify first, then the feldspar and finally the quartz, often in large veins running through the rock. Slow cooling, deep in the earth’s crust results in large crystal size.

Clay contains both alumina and silica and is added to increase viscosity to prevent the glaze from running off the pot when molten in the kiln. Clay also helps to keep the heavier quartz and feldspar suspended in water in the glaze bucket.

Calcium carbonate added in the form of whiting is an extra flux which helps to stabilise the glaze and can also produce a matt glaze surface. Whiting is ground up chalk or limestone.